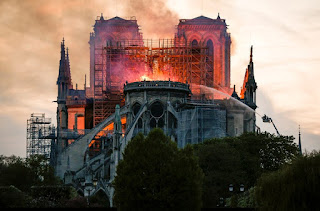 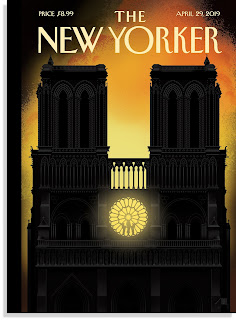 Dear friends and family,
Below is an account of the horrible tragedy from friends who are renting on the ile St Louis, just behind Notre Dame.
She does a very good job summarizing  their experience. See below after our comments.

Like a number of  you, we have been to Notre Dame many times (Midnight Mass, baptisms, organ recitals, etc). We lived about 100 yds from the bridge behind Notre Dame (Le Pont Archeveche) and I walked by it every day on my way to work. Judy made a point of passing by daily. We never wanted to take her supreme presence for granted.

We we were horrified watching the unimaginable destruction unfold before our eyes. It was so sad to see it go up in flames, little by little.
Already the donations are coming in to rebuild. It took 200 years or so for the original to be "completed". I hope we live to see the completion of this "rebuild".
We were truly shaken by this
Tony and Judy

Last week, school vacation started in many outlying parts of France. There were many French tourists from outside of Paris. We boarded a bus near where we live and quickly rode across the small bridge over the Seine connecting the Ile Saint Louis to the mainland, the Left Bank. On the bus were a mother visiting with three young daughters. The youngest, with the pinkest jacket and the pinkest barrette in her hair, perhaps four or five, gasped  as we had the view of the Seine right by where we live, “Aah!” she sighed, “Notre Dame de Paris!” I told this charming story all last week. Last night, as I stood on the bridge with hundreds of silent people watching the flames, I cried.
We had walked across the bridge nearest to Notre Dame a few minutes before the start of the fire,  stopping, as we do each time, to look at the Cathedral and the river, saying, in gratitude, we never tire of this view. It is the photo of where we reside in Paris that sits in our New York living room.
When we heard of the fire we went to the bridge near us. There were no news media yet, just people gathering. Hundreds. Silent. Even those on their phones were whispering so no one could hear. Disbelief. Flames. Sirens. Cascades of water pouring into the Cathedral. The flames not subsiding.  One man stood on the balcony of his apartment facing the Cathedral. We could hear, through the open French windows of his apartment, the music of the Requiem Mass that he was playing.

There are no adequate words for the immeasurable loss of the treasures inside. We went to see Notre Dame this morning. The firemen (500 of them) were able to save the outside stone structure and the two towers. We are told people were able to save some religious relics. The entire wooden Medieval interior and sculptures are gone. Macron says France will rebuild. The coat of arms of Paris is an old ship floating on a rough sea,  the motto in Latin always under it is “Fluctuat nec mergitur.” “We are shaken but we do not sink.”
Love,
Ruth (and Merv)

If you are commenting as ":Anonymous", please sign your name so we know who you are. Thanks 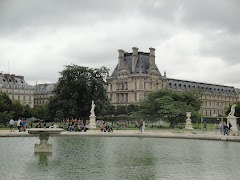